Closing in on the Product Release of the REACh™ Detector System 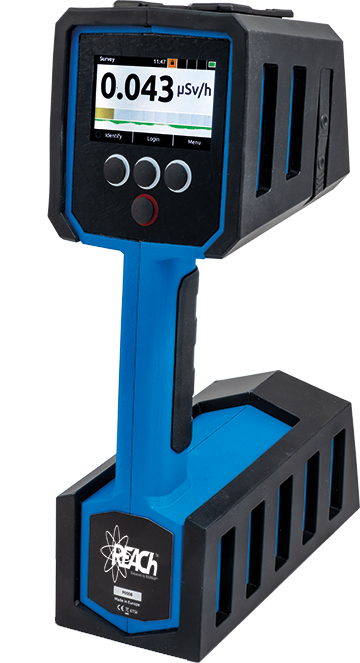 After over 2 years of research and development the anticipated release of the REACh™ Detector System is nearing. We have driven the idea of performing waste characterization and classification in the field with a handheld detector into a reality.

It all started with an idea and has led us to an innovation that will shortly become the industry standard.

What makes REACh™ a System: A system is defined as a set of things working together as parts of a mechanism or an interconnecting network.

We started with our expertise in radioactive waste characterization, classification and software development that has spanned over 40 years. Using that as a basis, we added a state-of-the-art handheld device designed to perform in-field spectroscopic radiation measurements and integrated it with the RADMAN™ Platform. The result is the RADMAN™ Enhanced Accurate Characterization Detector System - The REACh™ Detector System, or just plain REACh™.

The REACh™ Detector is a handheld device that utilizes a 2”x2” Thallium doped Sodium Iodide crystal [NaI(Tl)]. This is a commonly used crystal in the nuclear industry. It provides some of the best light output among scintillators, which allows for easy scintillation (i.e., more flashes of light are produced from photons). NaI(Tl) crystals can be produced relatively inexpensively, provide good efficiency, and are able to measure the intensity and energies of incident radiation.

Although HPGe and CZT detectors can provide some of the best energy resolutions for gamma spectroscopy, NaI(Tl) detector efficiencies are about a factor of 8 to 10 times better than that of HPGe and the CZT detectors have one of the lowest detector efficiencies due to the CZT limited detector size. Because of the complexity, costs, and detector efficiencies associated with HPGe and CZT detectors, they are not well suited for in-field-measurements of typical nuclear waste. Typical nuclear waste is comprised of well-defined, well-known, gamma emitting radionuclides. A scintillator, such as an NaI(Tl) detector which has been integrated into a hand-held instrument, is the most appropriate tool for the application of in-field waste characterizations.

It is all about quick, reliable, and reproduceable measurements.

The software integration rounds out the system on the backbone of the RADMAN™ Platform which is the most trusted radwaste management software for characterization and classification of radioactive waste and material in the industry.

How was REACh™ put through its paces? We identified the critical characteristics associated with field characterization scenarios, defined the acceptance criteria, executed the test plan, and validated the results by way of independent reviews & comparison to current methods of characterization.

Testing at the Processor

The first round of field testing was performed at a LLRW processing facility in May of 2021 where a variety of packaged waste containers from several generators was available. Twenty-nine (29) waste packages had spectral acquisitions during the first round of field testing. This included twenty-one (21) 55-gallon drums, Six (6) B-25 boxes and two (2) 20’ long intermodal containers.

Detailed radiation surveys were performed on the packages prior to each spectral acquisition. Historical characterization information was available for each package for validation purposes.

Based upon the results obtained from the field testing of the REACh™ Detector System, it was shown that REACh™ can effectively detect the gamma emitting radionuclides present in the packaged radioactive waste. The results were in good agreement with those found with an HPGe detector-based system and the total gamma emitters found were within 10%. The REACh™ results for the 55-Gallon Drums on the aggregate were about 6% lower than the HPGe results. The REACh™ characterization results were over 20% lower on the average than the waste generator results.

Testing at the Generators

Thirteen containers had spectral acquisitions taken during the field testing at three nuclear sites. This included three (3) 20-foot intermodal containers, one (1) long handled tooling container, two (2) B-25 boxes and seven (7) liners consisting of six (6) ASC-200 steel liners and one (1) 14-195 steel liner. A total of over sixty (60) gamma scans were acquired on the thirteen containers.

The Green Is Clean (GIC) material is very-low-level-radioactive-waste in that it has measured dose rates that are near equivalent to the background radiation in the area. Although this container is hardly radioactive, REACh™ was able to identify and quantify the prominent gamma emitters for this container.

The contaminated tooling container was very low dose material, like the GIC above. REACh™ was effective at identifying and quantifying the prominent gamma emitting radionuclides associated with this container. The REACh™ system exceeded our expectations with very low-level material and proved to be a powerful tool to aide in free release surveys.

The REACh™ system includes a remote survey stand and collimator to allow remote gamma scans on higher activity liners of ion exchange resin and filters. The remote operation provides gamma scans of high activity materials in an ALARA fashion. There were six (6) resin liners and one (1) partially full sludge liner analyzed during field testing. Results were in good agreement with the plant’s characterization results and the gamma emitting activities were within a few percent. By using REACh™ to directly measure the gamma emitting activity in the liners, the in-house sampling and analysis can be eliminated.

We performed measurements of various sources thrown into a carboard box, as well as direct measurements of the sources to determine acquisition times and radionuclide identification capabilities for these very low activity sources. These are the types of sources most plants are using to test the response of current tool monitoring alarms. REACh™ was able to effectively detect all the gamma emitting sources. All radioactive check sources which were measured were easily identified with all but one (1) source being identified in seconds. An approximately 50 nCi 100cm2 Cs-137 source took a few minutes for identification, but REACh™ was able to easily identify this extremely low-level source at each measurement distance.

REACh™ is poised to change the current status quo by providing the ability to characterize radioactive packages in the field with fast, accurate In-Situ Characterization. The goal of the REACh™ design was to save time with instantaneous readings, thus minimizing dose with an ALARA conscious solution, and minimize potential human errors with the integration of both software and hardware…

AND WE HAVE SUCCEEDED!!!