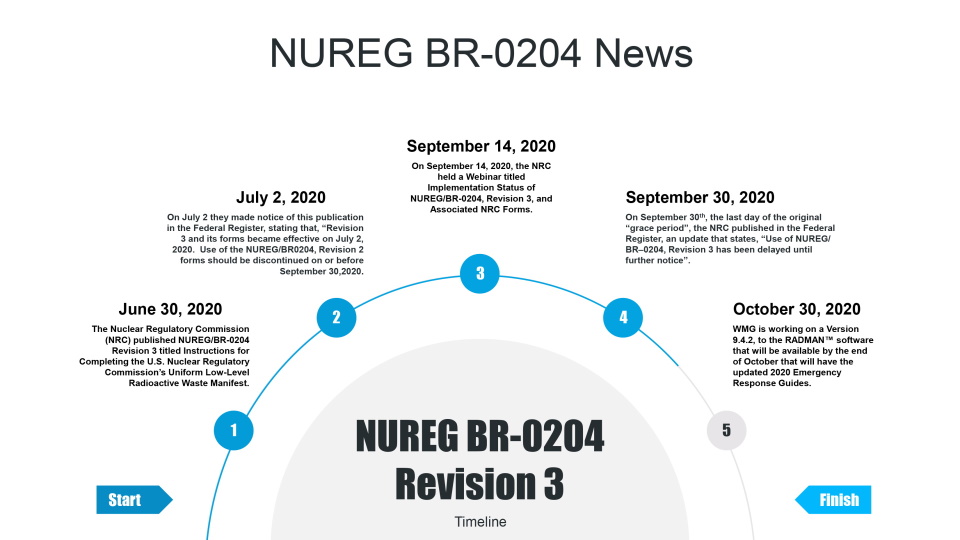 On June 30, 2020, the Nuclear Regulatory Commission (NRC) published NUREG/BR-0204 Revision 3 titled Instructions for Completing the U.S. Nuclear Regulatory Commission’s Uniform Low-Level Radioactive Waste Manifest. On July 2 they made notice of this publication in the Federal Register, stating that, “Revision 3 and its forms became effective on July 2, 2020. Use of the NUREG/BR0204, Revision 2 forms should be discontinued on or before September 30, 2020.” This release caught many stakeholders by surprise, some of whom had been commenting and working with the NRC on the development of the revision. Of particular concern was the relatively short 3-month suggested implementation period. Multiple utilities requested the Nuclear Energy Institute (NEI) to ask the NRC to delay the implementation of Rev 3 of the 540/541 forms beyond the 9/30 date.

On September 14, 2020, the NRC held a Webinar titled Implementation Status of NUREG/BR-0204, Revision 3, and Associated NRC Forms. Based on discussions and input from stakeholders, the NRC agreed to publish a notice in the Federal Register soon after evaluating an extension to the implementation date. Stakeholders and the NEI suggested a date of 3/31/2021. For the near future, the NRC has indicated that they would be willing to “exercise enforcement discretion” so that no one would be cited for using Revision 2 beyond the 9/30 date.

The preface of NUREG/BR-0204 Revision 3 states that the changes from Revision 2 include:

As with many things nuclear power related, “the devil is in the details”.

On September 30th, the last day of the original “grace period”, NRC published an update in the Federal Register stating, “Use of NUREG/ BR–0204, Revision 3 has been delayed. Until further notice, licensees should continue to use NUREG/BR–0204, Revision 2 and the versions of NRC Forms 540, 541 and 542 that were renewed in January 2020, or equivalent, as defined in NRC’s regulations.”

WMG is working on inclusion of compliant NRC 540/540A and 541/541A forms in the RADMAN™ suite. We will likely be “holding” that software release, Version 9.5, pending further guidance from the NRC about an updated implementation date.

Until then, we are working on a revision to the RADMAN™ software (version 9.4.2), targeted for release by the end of October, that will have the updated 2020 Emergency Response Guides in addition to the January 2020 Uniform Waste Manifest.